The Trailblazers Of Women's Rugby League (2016)


The game of rugby league in Australia had just entered its teenage years when a revolutionary concept took not just the game, but society and the media by storm.

A whirlwind five-month period produced masses of opinion from all over Australia which had an impact even outside rugby league circles.

In late-May, 1921, two young ladies from North Sydney, Molly Cane and Nellie Doherty, wrote a letter to the New South Wales Rugby League (NSWRL) requesting their assistance to create a women’s rugby league competition. They had been passionate and supportive of the game all their lives and were enthusiastic about playing. Their letter outlined the success of women’s soccer in England and France and how this would translate to similar success in Sydney.

On May 23, just a few days after receiving the letter, the NSWRL committee determined that the timing was unsuitable for them to assist the ladies. However, on May 26 the committee had a complete change of heart and agreed to provide the ladies with all the assistance they required to form clubs and a competition.

The following day, Cane and Doherty held a meeting at the NSWRL headquarters in Philip Street, Sydney, where they elaborated further on their plans, mostly around the abandonment of the residential rule.

The ladies also had figured out suitable match attire, which was to consist of a bathing cap to contain their hair, standard football jumpers and knickers similar to those worn by the French and English female soccer players. NSWRL Secretary Horrie Miller set aside the next Friday evening to have a meeting with the ladies to further discuss and assist them with their plans. All women interested in playing were urged to attend.

On June 3, 1921 a crowd had gathered at Philip Street to hear the NSWRL officially agree to form a Women’s Rugby League competition in Sydney that would comprise of at least five teams, based on the 50 women who had attended the meeting. This news brought about much cheering and excitement amongst the crowd in attendance.

The uniform proposed by the ladies the previous week was accepted, but with the inclusion of shorts as well.

A tally of the women in attendance at the meeting was made so as to determine which districts were being represented. Balmain had two players, Easts 23, Glebe four, Newtown eight, Norths nine, Souths 11, Wests five, St.George seven and University one. After this was completed, the clubs formed were Glebe-Balmain, Newtown-South Sydney, St George-Western Suburbs-University, North Sydney and Eastern Suburbs.

The committee was then elected with Miss Molly Cane as the president, Mrs Cann Vice President, Miss Eulalie Stagpoole secretary and Miss Nellie Doherty as treasurer.

Miller said, “I have interested myself in the proposition, though at first I was not too keen. But everything has a beginning. Why should not women have football?”

Nellie Doherty added that a game was already being scheduled to be played soon, with Miller agreeing to provide a good referee, as well as considering he may have to make the Showground available, in expectation of a healthy crowd.

Miller then jokingly added, “It has been suggested that the ambulance man will have to include powder and paint in his box of tricks.”

Molly Cane retorted, “It won’t be wanted. We are going to play football as the men play it,” which was met by much loud applause and cheers from the crowd.

On June 10, a second meeting was held which saw at least 100 women in attendance. The women provided updates on the work done by the committee to date, as well as working with Miller to organise a training routine, with the first session to take place the following Friday evening at 7.30pm at the Sports Ground.

Miller addressed some of the public outcry that rugby league was too rough for women: “You don’t need to take too much notice of the opposition to the scheme, or the gloomy predictions about the ill-effects inseparable from such a strenuous game. A game is what its participants make it. If men want to make rugby rough they can turn it into a slaughter-yard. I am not going to say rugby league is the best game in the world. This is an age of changes and we must advance with the times.”

He then went on to say, “I can’t see how one girl’s life can be ruined if she bumps into another girl. I think the girls are as hard as the men!”

The women’s committee had entrusted Sir Denison Miller with a sum of money for safe keeping that would be used to help get the competition started. They also produced samples of the attire they would be wearing on the field, which were inspected and approved. It was also shown that they had paid all expected fees in full which indicated that they weren’t just serious, but meticulously organised.

With the new concept moving along at great speed, the NSW Soccer association decided to send out invitations to women who wished to form their own clubs and women’s competition, as they believed the game was better suited to women than the more rigorous rugby league.

On June 17, the ladies have their first training run. The NSWRL had organised that no men be allowed to come and watch them train, however other women could come and watch for a small fee. Miller, a referee and two police officers guarding the premises were the only men present while over 100 women practiced ball and kicking skills. Every Friday afternoon this same routine took place for near three months.

The following week saw the shortened NSWRL season come to an end, with North Sydney claiming their first-ever title. The City Cup competition then kicked off, but halfway through saw a large squad of the code’s best players set sail for another lengthy tour of Great Britain. This had a mildly negative impact on crowds. The City Cup final was held on September 10, with South Sydney beating old rivals Eastern Suburbs 21-10 in front of 15,000 fans.

In the few days after this game, Miller made it very clear to all clubs, players and officials, that the NSWRL was not affiliated with the women’s game, and if anyone involved in the NSWRL or its clubs was participating or assisting the ladies, that they would be disqualified.

On September 17, the ladies match took place. There were no other matches being played on the day. There was a sprint being contested by ladies playing in the game, which was won by Maggie Maloney.

The great Dally Messenger defied the NSWRL by putting on a kicking exhibition to promote his new football during the halftime break.

The two sides then took their places on the field for their historic first encounter. The teams were:

A whopping crowd of at least 20,000 people flocked to the Agricultural Ground to witness this historic game.

Miss Lottie Collins kicked off for Metropolitan. Maggie Maloney showed her blistering speed from the outset, almost scoring early on in the game. Miss Ling scored the first try and points for the game, using her sharp pace to break the line and score.

A clever piece of footwork by Miss Allenby saw her dive over to level the scores at 3-all before an exciting try by Maloney, which was fully appreciated by the crowd, was the only other scoring to take place in the half, which came to a close with the Blues up 6-3.

Metropolitan started the second half in fine form, with Miss Burton scoring a try shortly after the teams had returned to the field. Maloney then scored her second try thanks to yet another thrilling run.

When Miss E Gillet scored shortly after to give the Blues a 15-3 lead, the game threatened to become a blowout, but Miss Skehan got the Reds on the board in the second half to reduce the margin to nine points. Her effort was followed up by Miss Hunt, whose skilful effort to score and then convert closed the scores to 15-11.

Maloney then put the game beyond doubt with two more tries in very short time to give the Metropolitan team a 21-11 victory. 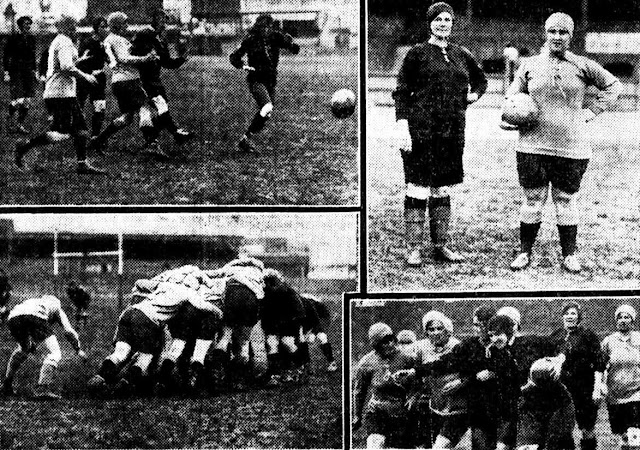 **This article appeared on the Commentary Box Sports website**